Since its artistic director resigned earlier this year under a cloud of allegations, the American Shakespeare Center in Staunton has embraced change – with a new model led by the actors. WMRA’s Mike Tripp takes us backstage.

CHRIS JOHNSTON: I have done the deed. Didst thou not hear the noise?

SPEAS: I heard the owl scream and the crickets cry. Did not you speak?

This past year, the Center had to adapt – and not just to the pandemic, which, as with almost all other performance venues, caused it to move to online presentations, outside performances and then social distancing within the theater. Artistic director Ethan McSweeny stepped down in February after two and a half years at the helm.

According to a February report in the Washington Post, dozens of staff at the theater have alleged McSweeny contributed to a toxic work environment and unfair treatment of some women and people of color.

We asked McSweeny to respond to those allegations.  In an email, he said that they were ‘false and remain unsubstantiated.’ He also said that he was happy that ongoing efforts by the Playhouse continue to get attention.

Rodney Young II, chair of the ASC’s board of trustees, said he couldn’t comment about any personnel matters, including McSweeny’s departure.

But whatever the reasons for McSweeny’s exit, Young said it opened the door for the actors to take over.

RODNEY YOUNG: It’s exciting for an organization to have an opportunity, not necessarily by choice initially, to rethink how that organization is going to do what it does. The circumstances that we’ve confronted create for us a real opportunity to reimagine, to reconstitute … rethink how we’re going to move forward.

Their choice moving forward? … Four actor-managers working in concert as a team.

YOUNG:  This is not their first rodeo when it comes to this kind of actor-driven, actor-led approach to producing plays. So, it made all the sense in the world to us to more formally implement this approach.

John Harrell, with ASC since 2002, is one of the four actor-managers. He’s responsible for text --- other words … scripts.

JOHN HARRELL: We’ve been making plays like this for a decade and a half.  The sort of artistic generation side we’ve been doing for a long time in a mix. We’ve done it without directors, and we’ve also done seasons where we’ve had directors. Kind of back and forth. In terms of being part of a system that is running the organization, I’ve never been a part of that. In fact, I don’t know many theaters that have operated this way. I suspect that we’re going to see a lot of this.

Is this the next new trend?

HARRELL: I think so. I think what we’re seeing is a reexamination of hierarchies in this country and in this culture. And I think that what we’re doing here is a part of that.

Chris Johnston serves as actor-director for music.  Macbeth is just one of the characters he has portrayed on stage.

JOHNSTON: Teamwork … essential. There’s no way we can do this without every single person pulling their weight. Every single one of us is putting in all sorts of hours. Zoe is typing up a million emails a minute it seems like. John has been working on text, cutting all of the plays. I’ve been going through tons of music. Carter has been handling contract negotiations with directors and playwrights.

That’s Brandon Carter, the actor-manager who serves as [quote] ‘ambassador.’

JOHNSTON: But that’s only us four. And there’s education and there’s development. There’s the box office. Every single person has something to do. And it’s not just one person in these departments. There are other people, and they are all very busy.

SPEAS: And we’re only a few months into this, I’ve really enjoyed watching all these groups within our company that make up the theater delegating and sort of standing up for what they do. And the work being shared. And if you are the person who designs this work, you should say how it gets done. It doesn’t make sense for me to tell you how to do that work.

As with anything, there are growing pains.

SPEAS: Rehearsal is trial and error. We see the experiment taking place and watch the results happening in real time. We won’t know how this new model will work until we bring that audience back.

Speaking of their audience …

SPEAS: We have some really cool and diverse seeds planted in the ground that I’m looking forward to see how they … how the come up as the Spring progresses.

BRANDON CARTER: A kingdom for a stage, princes to act, and monarchs to behind the swelling scene.

Carter reads lines from Act I, Prologue of Henry V.

CARTER: We have been reconfiguring what this place looks like and trying to go about it the best way possible with where the nation is right now. I think we will be a stronger company, and we’re so focused on getting back to the original storyline of what the ASC is about, maintaining our ensemble signature. That’s what this company was built on, and I think that’s what these walls hold is our legacy. I really strongly believe our audiences will see that joy that they always enjoyed seeing rooted in the text, rooted in the storytelling, rooted in challenging Shakespeare at its core. A different but stronger company.

ASC’s new season starts in May. They begin with 'The Scottish Play,' followed by 'Henry V,' 'All’s Well That Ends Well' and a fourth as yet unannounced title. 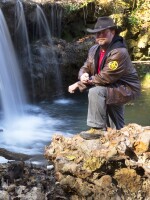 Mike Tripp
Mike Tripp is a freelance reporter based in Staunton. He has worked as as a photojournalist in the Shenandoah Valley for more than 25 years.
See stories by Mike Tripp