Are there certain sounds like calm voices or magazine pages turning slowly that you find deeply relaxing?  If so, you may be experiencing autonomous sensory meridian response or ASMR for short.  Dr. Craig Richard, professor in the department of biopharmaceutical sciences at Shenandoah University in Winchester and creator of ASMR University, has been studying this phenomenon for years - he’s released a new book about it called Brain Tingles.  Dr. Richard spoke with WMRA’s Chris Boros about how people react to ASMR.

Dr. Craig:  It’s definitely a deeply relaxing feeling that has these pleasurable brain tingles, but it’s also bizarre because of how it’s stimulated.  And you may be familiar with these ASMR videos which have almost taken over You Tube and in these videos there’s people that are pretending to be clinicians or they’re pretending to be a hairdresser and their interacting with the camera in a way that makes it seem like you’re having this experience.  And what they’re doing in those videos is that they’re mimicking personal moments of care and attention like something you’d receive at a spa or even the kind of attention that Bob Ross would give the camera while he was painting his Joy of Painting paintings.

WMRA:  You mention in your book that a lot of people experience this by accident.  How did you find this?

Dr. Craig Richard:  I was listening to a podcast and the epidote was about ASMR and I was about to turn the episode off and not listen because it sounded like it was something that was made up but then they gave this example of people who watch Bob Ross’ Joy of Painting TV show.  When they watch it, they get deeply relaxed.  And that made me realize that I remember being a kid coming home from school, I’d turn on Bob Ross, I’d put down a floor pillow, and he would turn my brain into this blissful state of these head tingles.

WMRA: It wasn’t just the things he said but the way he said them.

Dr. Richard:  Right.  It’s his whole disposition.  Your brain is interpreting everything he’s doing as that he is a very kind individual who’s trying to help you somehow.  And your brain experiences all that as if you’re in a safe situation with someone who is trying to help you.

WMRA:  What are some of the most popular triggers for ASMR?

Dr. Richard:  From most research studies, when they ask participants “What is your favorite trigger?”  The most commonly reported trigger is whispering.  People love whispering.  And what our initial studies are showing is that it’s actually light touch which might be the strongest trigger which makes sense because we are very picky and choosy about who touches us and so that has to be a trusting situation.

WMRA:  So it’s not just audio then.  It’s touch – you talk about “scenario” which is another one in your book.

Dr. Richard:  Yeah, there’s clearly audio triggers there, just listening to people whisper, listening to people crinkle and tap.  There’s visual triggers, slow movements, a little tilt to the head, authentic and genuine smiles.  All those kind of participate in the ASMR experience.

WMRA:  Smiles.  Yeah.  I never thought about that before.  But you’re right, when you see a smile there’s this feeling you get when you see that.

Dr. Richard:  Yeah and it has to be genuine.  Because if your brain doesn’t processes that the smile is genuine we have a word for that and it’s “creepy.”

WMRA:  What is your favorite ASMR?

Dr. Richard:  I like whispering.  I find whispering the most soothing.  And because I mostly use ASMR to help me fall asleep that one works the best for me because of when I use it.  So what I’ll do is I’ll put on an ASMR podcast and I love ones that have whispering.  And it doesn’t even matter what language the whispering is in because it’s not what they’re saying it’s the sound of someone whispering.  So there’s one podcast I listen to and it’s in Korean and I have no idea what they’re whispering about but I’ll put that on and it just turns my brain to fuzz and I just fall asleep much easier that way.

WMRA:  If you had to choose the most important effect of ASMR, what would it be? 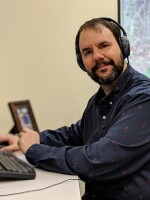