Hurricane Maria devastated Puerto Rico, and the damage from the storm is still being felt more than a year later.  Robert Mott, a trombone player in Harrisonburg, felt moved to do something for the island’s residents.  WMRA’s Kimberlea Daggy reports.

ROBERT MOTT:  Last year in February I had been reading articles about what had been happening in Puerto Rico with the slow recovery from the hurricane, and I said, “There has to be a way to just go down there and spend money” and then I thought,” Well, I’m one person and I could do that, but what if we took some other people” and before you knew it we have nine of us from the states that are going down and we’re doing five days of free concerts.  And hooking up with some friends that we met a long time ago.  Being able to play with them and have them coordinate our trip on the ground has been a real wonderful thing.

Among those friends is Bam Bam Rodriguez, a native of Puerto Rico.  He’s one of nine trombonists joining Mott for the five day tour of concerts and workshops.  They call themselves “Trombonists for Puerto Rico,” and they hope to honor, celebrate and encourage Puerto Rico’s ongoing recovery.  Dr. Andrew Lankford, who teaches trombone at James Madison University, was one of the first to commit to the trip.   He’s thrilled with the response from the trombone community.

ANDREW LANKFORD:  Michael Davis has donated many of his CDs and pedagogical material, warm-up method books and things like that.

MOTT:  For over a decade, he was the trombonist for the Rolling Stones.

Mott says the idea for the trip has really resonated in the music community.

MOTT:  Mike Corrigan, who owns BAC musical instruments in Kansas City, builds some of the most beautiful custom brass instruments.  He’s gonna set up there on Friday and do free instrument repair for anybody that shows up.    Sim Flora, who’s a trombone professor down at Ouachita Baptist University in Arkadelphia, Arkansas, has specifically arranged music for us and given it to us and said, “Hey, this’ll be good for your trombone ensemble.”

Mott is especially pleased with the diversity of the ensemble.

MOTT:  We’re all trombone players, they share that commonality, but everyone comes from a different experience.  A lot of us are NOT full-time trombone players, we do other things – a mix of educators and weekend warriors, semi-professional players that play in ensembles and really just have a passion for the trip.

One of those educators is Becca Bauer.  She studied trombone at James Madison University under Dr. Lankford and currently teaches band at Walton Middle School in Charlottesville.

BECCA BAUER:  You’re sort of looking for ways that you can feel like you are contributing and helping society in times like that, and I was like, “I gotta go to this thing.” The idea that I could go and play trombone in Puerto Rico where they have had such a huge setback, a totally different culture, and just being able to bring something to them that I have to offer.

Among their offerings, not surprisingly, are trombones!

LANKFORD:  We just shipped over 12 p bones.  It’s a plastic trombone.  They’re really good instruments for beginners.  They’re very lightweight, easy to hold, actually easy to get a sound out of and they’re relatively inexpensive for us and for Conn Selmer, who is helping us acquire those instruments and ship those over there.

It’s not just music.  The group will also spend their money there.

MOTT:  We have the goal of making sure that some of the monies that we raise are actually going to people in Puerto Rico.   We sought out specifically hotels that were owned by Puerto Ricans that had been damaged, to cut through the red tape and get the money into the hands of the people that really needed it.  Once that was established and we’ve already paid for all the hotel rooms, now we’re looking for ways to inject money into the economy, buying T-shirts for the all-day workshop that we’re doing, and eat in locally owned restaurants.

Trombonists for Puerto Rico hope to not only bring money and music to the island, but also some emotional relief, as Bauer explains.

BAUER:  I hope to be able to meet people and talk with them and bring them joy, bring them comfort in a time that there’s not a lot of stuff around that helps them.  I hope I am able to learn something about times of adversity and seeing how people are dealing with that and really helping myself put myself in their shoes and also helping to lift them out of that adversity.

The trombone ensemble will be in Puerto Rico November 7-12.  And they’ve been rehearsing…  [music]   They have a Go Fund Me page – find it at Trombonists for Puerto Rico.  They hope to raise 14K by the time they leave next week. 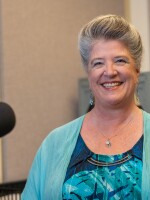