A delivery van was gutted and fitted with stainless steel galley surfaces, also the exterior got fresh paint and snappy graphics including door art of a jovial welcoming tiger. The calligraphic logotype emblem proclaims, "MASHITA  it means delicious." Detail is on EatMashita.com and on the Mashita Facebook page  (where visitors have left approving comments like "NOM NOM NOM NOM"). Their usual location is on Harrisonburg's East Market Street (Rt 33) "hilltop" area,  marked B  on this GoogleMap.

Trivia 2:  Google translate's Korean  pronunciation of mashita  was "MAAAH-she-TAAAH," but the same page's English attempt was  "muh-SHEE-tuh."  It seems to be written out, approximately, as:  맛있는

This Spark is an encore of a broadcast which first aired on: Fri December 20, 2013. 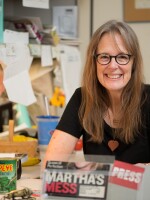