Skip Herman is a world-renowned instrument repairman from Frog Level Guitar Shop in Abingdon, Virginia. He's part of Folklife's 2021-2022 class of master artists and apprentices. Pat Jarrett from The Virginia Folklife Program visited Skip in his repair shop and brings us his recollection of spending time with Skip.

Pat Jarrett: There's a long tradition of luthiers and instrument makers in Southwest, Virginia, and Skip learned from those masters. One of his contemporaries is the great luthier Wayne Henderson from down in Rugby and you’ve probably heard of him. It took Eric Clapton nine years to get his Henderson guitar. He is world renowned. Skip and Wayne also had day jobs. Wayne was famously a mail carrier in Rugby, but Skip was an engineer on oil rigs out at sea. So he would be out there for two weeks and then come home for two weeks. He dabbled in repair work because he saw that it took so much effort to make one guitar and then you sell it for big chunk of money. And then you have to start making another one. So skip saw that there is a space for a repairman. I asked Skip when I was talking to him, I said, well what makes you different from a luthier? And he goes, well, I can make an instrument but it's not my forte. But these guys that make instruments really can't diagnose and repair like I can.

Skip Herman:  This guitar came to me.  It was run over by a car.  So I took all the good parts off, took the neck off - the dovetail joint and blocks, the name plates on the inside. And I started inlaying the neck.

PJ:  It's a specific skill set to diagnose and repair, and he set up shop in Abington doing guitar repair mainly for a shop there in town. He's worked with a lot of big names. He was Jefferson Airplane's guitar tech. He's repaired instruments from all over the world. And so he's got a very specific skill set. But from years of smoking, he's developed stage four emphysema. He sought out an apprentice that he can pass this on to. I know that he said he felt guilty for having smoked for so many years that he has emphysema now because the repair element of his job in the creative economy was so integral because so many people play music down there. So he was worried for his community.

Skip Herman: I felt guilty when I got emphysema because I spent too many years smoking cigarettes. And I felt like I was letting the community down by being the only guy that did what I did in this area.  And all of a sudden, I'm going to have to be gone and there's no one to do it.

PJ:  And he found K.T. Vandyke, who was a musician in his own, right and was working with Michael Cleveland, an amazing fiddler, but wanted to take some time off the road. They approached us at the Virginia Folklife program. We have an open application for apprenticeships. It was during the pandemic when we were taking a break from giving out apprenticeships. That was in the early days of the pandemic when we didn't know what was safe and what wasn't. And when I stepped in as director, I got an email about their application and K. T. contacted me and he let me know that time might be short with Skip and I realized it was important to honor this craft and this man.

Skip Herman:  And K.T. stepped up and took the reins. And that took a big weight off my shoulder because I did feel guilty and he kind of took that guilt away and he's enabling me to play more guitar and take on the responsibility of all this work.

PJ:  When skip said that about being able to play more guitar, I could feel the relief. It's a heartbreaking story. I know I teared up.

Chris Boros:  You could hear in his voice that he cares about this stuff and his community. This guy is there for the people.

Skip Herman:  I did all the luthiering for Front Row Music and before that it was Matt Smith Music. But when in there one day to get some strings and stuff and K.T. is behind the counter and one thing led to another and K.T. kind of took off and he was doing sound and working with other bands and stuff. And my emphysema was getting worse and I told him I’m going to have to get out of this soon. I need to find an apprentice.

K.T. Vandyke:  Yeah, he was incredibly generous with his time. And would let me come in and just take up space and waste air and ask really annoying questions about stuff he’d already answered a few times.  I owe this fella a lot.  As far as working together, I couldn't ask for a better mentor. It's been a joy of lifetime to work with him.

CB:  Does skip realize his importance?

PJ:  Yes and he should. He's been doing it for so long and keeping these instruments performing properly. It's a responsibility.

Skip Herman:  I just got out of Vietnam in 1970 and I went to California and I was going to be a big folk singer. So I did the folk tour up and down the West Coast and that's where I met Jorma Kaukonen and a lot of those people, those were the Janis Joplin days and Fillmore West and all that was going on. And then I came back here. I realized that I would never make any money doing that. I wasn't as good as those guys and my heart wasn't in it. And then when school was over and I needed money, there wasn't really any work here, the coal mines were closing and there were a lot of problems here. So I took a job with Tidewater and I went offshore and became a marine engineer. And I worked two weeks on, two weeks off, six months on, six months off and I would come back home here and work on guitars. And I kept my luthier business going all that time.  In 1983, I was injured offshore. And so I settled here in Abingdon permanently.

CB:  Are Skip and K.T. still the people to go to in Virginia when you need an instrument repaired?

PJ:  In that part of the state, yeah, certainly.

CB:  And they can repair anything?

PJ:  If it makes noise, I think they can repair it. But they had acoustic. They had electric. They had a piano in there – bass. When you talk about repairing a big stand-up bass, that's nearly architectural. You have to look at where the stress points are, you have to look at where things are broken. I think he repaired a cello when I was there. Skip documents this quite well, he photographs the before and after, and it's incredible. He plays fingerstyle guitar and he actually records in his workshop. Skip is an accomplished musician and he was playing on a guitar that he had all the inlay for. It's a beautiful guitar, but you could hear his oxygen machine. And I know I talked about the responsibilities that Skip feels but skip really says it beautifully himself.

Skip Herman:  The thing about lutherie, is that so many guys want to make guitars. They want to build and someone needs to do that. But if you don’t have sustainability, then you don't have down the road and someone has to repair them. It's the only way to keep them alive. And someone has to repair the old ones, they’re the real jewels.  And somewhere down the line, someone will come up with a new jewel. But for right now, what there is is what there is and we have to keep them alive.  And people seem to think that their instrument is special even though it may be a mediocre instrument.  For them, it's special. And when something happens to it, they would like to have their special baby fixed. And I think that's really the important part of what lutherie really is. It’s making sure that those folks are taken care of.  Just like your doctor takes care of you and your accountant makes sure your taxes are done, someone's got to take care of the musical instruments.

CB:  When you met Skip and you left for the day, and you were driving back home, what's the one thing that stood out for you the most about him?

PJ:  When I was leaving Skip's place and heading back up 81 was just his devotion to the craft and his commitment to the community. I've seen it before in folk artists, but he verbalized it, so clearly. And at this stage of his life, it was beautiful to experience.

CB:  Pat Jarrett from The Virginia Folklife Program sharing stories about Skip Herman. Pat, thank you for bringing us this audio today.

PJ: Thank you, Chris. I really appreciate it. 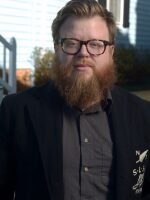