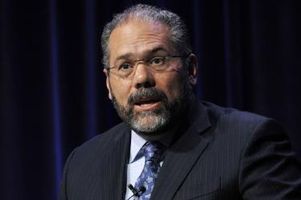 Ray Suarez will be speaking at James Madison University to mark the beginning of a week of discussions to celebrate the life and societal contributions of Dr. Martin Luther King Jr.

Ray Suarez hosted NPR's flagship talk show, Talk of the Nation, from 1993-1999 and continues to work as the host of the monthly public radio series, America Abroad. Suarez also spent 14 years as a correspondent and anchor at PBS News Hour, public television’s nightly newscast. He has covered 9/11, four presidential elections, reported from the floor of seven political party conventions, moderated two presidential primary debates, and reported from the Haitian earthquake among many other local and global disasters.

The event is free and open to the public, and is presented by JMU’s Center for Multicultural Student Services.

This program is dedicated to the life and legacy of Dr. Martin Luther King, Jr. and encourages both the JMU and Harrisonburg communities to come together in reverence of all that he and so many others before us have done in regards to equality for all.